The Hotel Torre de Núñez de Lugo hosted the annual celebration of the Provincial Association of Entrepreneurs of Hospitality and Tourism of Lugo, APEHL in which more than a hundred restorers from different parts of the province met, as well as local authorities, Provincial and autonomous, among them the mayor of Lugo, Lara Méndez; The president of the Provincial Council, Darío Campos; The subdelegate of the Government in Lugo, Ramón Carballo; The territorial delegate of the Xunta de Galicia in Lugo, José Manuel Balseiro, and the director of professionalization of Tourism in Galicia, Marta Fernández.

The president of APEHL, Cheché Real, was in charge of delivering the award of Hospitality Ambassador of the Province 2017 to Francisco Vázquez López, responsible for the management of emblematic venues in Madrid to taste the specialties of Galician cuisine as O Pazo de Lugo , Mesón O Chacón, La Casa del Lacón and the Portomarín Restaurant. Real also stressed that “took and continues to take the name of the products of Lugo outside our borders and always put their grain of sand so that the motto” E para comer, Lugo “is well recognized in the rest of Spain”

The association of latin hoteliers also wanted to pay homage to the trajectory of seven other people who dedicated their lives to the profession. In this sense, they received the prizes Whole life in the stoves Rosario Abeledo Castro, of the Inn Santa Marina, of O Corgo; Josefa Diaz Maseda, of the Polar Restaurant, in Lugo; Aurora López Herbón, of the Wood, of Lugo; Manuel Pena Varela, from the Cofín Restaurant in Lugo; Mª Luz Somoza Fernández, of the Restaurant Durán, of Escairón; And Angel Cobas Lourés and Ana Ver Fernández, from the Cobas Restaurant, in Lugo. Cheché Real made special reference to this edition of the meeting since APEHL turns 40. “40 years of effort, ideas, initiatives, all projects to make the tourism and tourism sector of the province had remained on the path of progress and innovation, how could not be otherwise.

This week, APEHL also held its general assembly and electoral assembly in which all the positions of the Board of Directors would be elected, and Cheché Real was re-elected as president of the association for a further four-year term. The candidacy of Real was the only one presented, reason why it was constituted the General Assembly without necessity of voting.

During the gala was given the awards that the association gives annually to those professionals distinguished by their trajectory The Hotel Torre de Núñez de Lugo […]
Do you like it?0
Read more

The Provincial Association of Hospitality and Tourism of Lugo (Apehl) will hold during March, April, May and June a series of informative meetings open to the […]
Do you like it?0
Read more

This gastronomic guide, key to the promotion of the province as a tourist and gastronomic destination, did not miss its appointment in Fitur, where it was […]
Do you like it?0
Read more 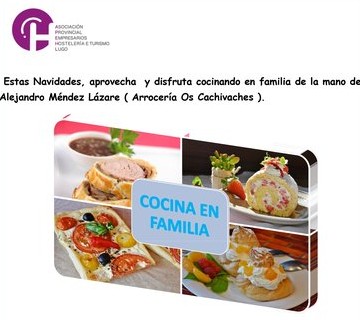