BrainTrust’s Tourist Barometer shows the profile of this post-VID traveler, who reduces his budget and will travel mostly in Spain
The autonomous communities that would gain travelers compared to last year are Galicia, Asturias, Cantabria, Basque Country, Navarra and Aragon

Despite the health situation that has arisen in recent weeks, many Spaniards are still willing to travel and enjoy new destinations, as long as the security conditions regarding the pandemic and possible restrictions on mobility allow it. BRAINTRUST has elaborated, thanks to a new wave of its Tourist Barometer, an x-ray of these travellers, how they are and how they will travel.

Overall, the data from the Tourism Barometer produced by BRAINTRUST concludes a high degree of pessimism regarding the economic situation in the coming months. While it is true that more than half of the Spanish people do not expect changes in their situation (53%), the pessimists with 29% exceed those who believe that the situation will improve by the end of the year, representing only 18% of the total. The self-employed are those who most expect a worsening of their situation, while the most optimistic are the employers and on the other hand, employees and retirees expect that their situation will not change in the future.

The origin of the traveler also gives rise to differences in optimism or pessimism compared to the economic sphere and, therefore, gives us a clue of those more likely to travel in the remaining of 2020. In this sense, the Basques and Galicians (21%) are those who best see the future economic forecasts, although the latter also have one of the highest ratios of pessimism (35%), along with the Valencian Community (34%) and Andalusia (33%).

Despite the circumstances surrounding us, still 25% of Spaniards intend to travel after the summer and during the remaining months of 2020. This figure represents a decrease of almost 3 points with respect to the same dates last year, with the negative consequences this will have for the tourism, hotel and restaurant sector. Therefore, from BRAINTRUST they warn of the vital importance of knowing the profile of these travelers, who they are and what they will do, in order to offer them the guarantees they need to not stop traveling after the summer, as long as the conditions and the evolution of the pandemic allow it.

The data offered by BRAINTRUST through its Barometer, allow us to draw the profile of those who, in spite of the current circumstances, do not want to stop travelling. This traveller would be between 18 and 30 years old (33%) or between 40 and 55 years old (32%) and would come mainly from Castilla y León (37%) and Madrid (43%). On the other hand, it is a profile of traveller to whom the risk does not suppose an important brake at the time of taking decisions (40%) and that in addition, has had to cancel some trip during this 2020 (39%).

The preferred destinations after the summer

As for the destination of these travelers, and always depending on the mobility regulations that will be established from now on, 14% would choose European destinations and only 4% would travel to other points outside this territory. As might be expected, a large majority, representing 82% of Spaniards, would prefer to stay in Spain to enjoy their vacations. In this sense, the autonomous communities that would gain in travelers compared to last year are Galicia, Asturias, Cantabria, Basque Country, Navarra and Aragon, while those that have the possibility of losing some share in travelers are Madrid, Extremadura and the Balearic Islands.

The budget collapses and the channels multiply

Another important aspect of this traveler that we call post-Covid, is the budget you plan to spend on your vacation. BRAINTRUST statistics predict a significant fall compared to 2019, going from around 900 euros on average to 780 euros, mainly caused by the changes of destination, which will be as previously indicated more national and by the duration of the same, which will also be reduced for the same reason.

Analyzing through which sources tourists are inspired to prepare a trip, it can be seen that those most likely to travel after this summer will use more channels to inform themselves, motivated by the current circumstances that require more data on the destination such as limits on the number of places allowed on beaches, restaurants, etc. as well as health measures and other restrictions. This traveler will rely more on specialized blogs (26%), travel guides (36%) as well as opinion websites (38%).

As for the type of reserve channel, some changes should be noted if we compare the situation with last year. Direct contact with the company continues to be the most widely used medium, although it is losing weight compared to 2019 (38% vs. 33%) along with comparators and aggregators, which are also experiencing a strong increase (16% vs. 31%). Online travel agencies are also gaining market share (17% vs. 20%) and traditional travel agencies are practically holding their own, losing only two points compared to last year’s data. On the other hand, single services are going to be the most sought after by travelers in these channels, well above the rest of the types of travel (68%), as well as dynamic packages (19%), while behind are organized packages that lose prominence as they are related to the crowds that travelers try to avoid in these times (10%).

Changes in accommodation and transport

Focusing on the types of accommodation that will be of greatest interest to the new traveler, we find a greater preference for family or friends’ homes (21%) and rental houses (19%), although the greatest increases are found in second homes (15% vs 3% in 2019) and rural hotels (12% vs 7%). The most affected will be the hotels in urban areas, going from 30% to 17% in 2020.

The way in which this tourist profile will move from now on will also be affected, largely by the new destinations chosen, which, being more national will encourage more use of the car itself, with 64% compared to 58% last year. As we have seen in the media lately, motorhomes are also experiencing greater demand (3% vs. 0.1%). On the opposite side, airlines are going to be affected with falls of two points in the case of traditional ones (13% vs. 15%) and six points in the case of low cost ones (12% vs. 18%).

For José Manuel Brell, co-director of the Tourism Barometer and partner responsible for the Quantitative Studies and Models practice at BRAINTRUST: “Autumn is not lost and we must save what is left of the tourism season with national travelers. It is the responsibility of tourism companies to know who these travelers are, and to adapt the value proposal to the new times. The physiognomy of the trip that we are looking for is radically different from last year, and in this sense the companies of the sector cannot remain waiting, but they must adapt to the new times post COVID, knowing that some habits and behaviors have come to stay”. 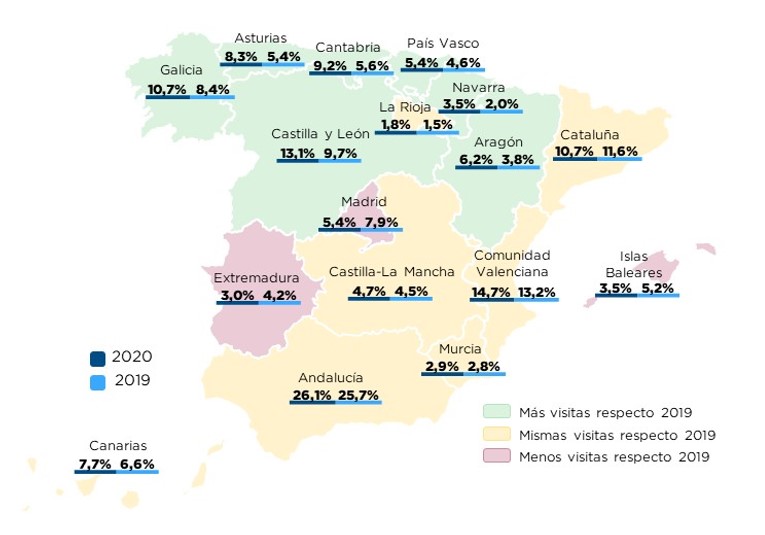 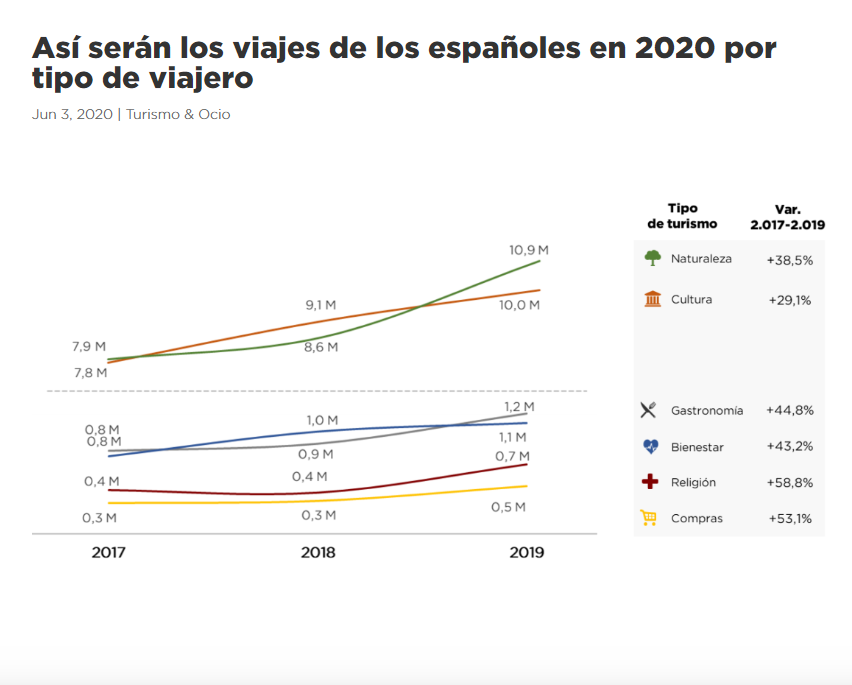 Galicia is at the top of the list of destinations chosen by travellers for gastronomic breaks, thermal and religious tourism

Nature tourism, sport, sun and beach, the trends for this year’s Spanish holidays Braintrust’s tourism barometer shows that young people will be the first to reactivate […]
Do you like it?0
Read more