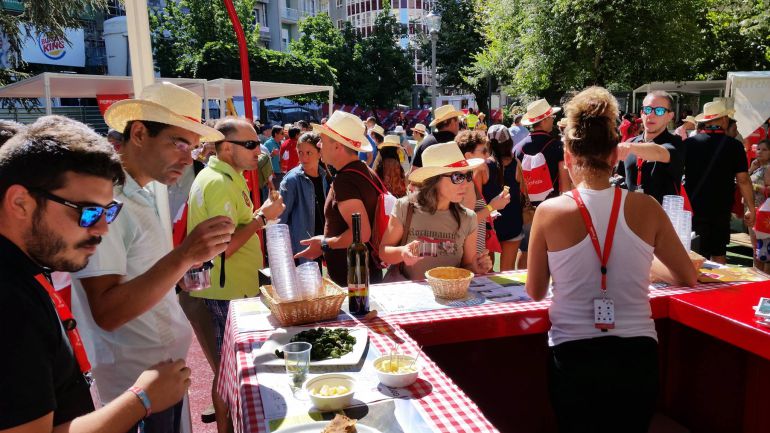 For the fifth consecutive year, the Provincial Association of Employers of Hospitality and Tourism Lugo (APEHL) takes advantage of the celebration of “La Vuelta”, tour arroud Spain to promote the Lugo province through a stand located in the VIP area all outputs stage of the 71st edition of this competition.

The stand … “E para comer, Lugo” is present in all outputs of stage and has developed special activities such as participation lucenses showcookings and restaurateurs, coinciding with the early stages of the competition, who have gone through Galicia. These actions, which include tastings of local products supplied altruistically by regulators advice of the DO Ribeira Sacra, IGP Galician Beef, DOP Queixo Arzúa-Ulloa, DOP Queixo do Cebreiro, IGP Pataca of Galicia, IGP Castaña de Galicia, IGP Grelos Galicia IGP, Pemento de Mougan, IGP Mel de Galicia, IGP Fabas de Lourenzá and Ecological Agriculture of Galicia, as well as Avimós, Asovega, Shipowners Burela, Cookies DAVEIGA and Afapán will continue until the end of the Tour, 11 September. In addition, copies of the new guide of Hostelería de Lugo will be distributed .

The initiative, which this year has the support of the Diputación Provincial de Lugo, is having very good acogedia around the public, according to the president of the Association, Cheché Real, who also believes that the stand is helping promote tourism in Lugo and province.

The Xunta has already received around 5,000 requests for aid from the III Rescue Plan, which in a second phase could reach 200,000 euros

The Xunta has already received around 5,000 requests for aid from the III Rescue Plan, which in a second phase could reach 200,000 euros

Terms and conditions governing the contracting of a service of "DEVELOPMENT AND CONSOLIDATION OF THE BRAND GALICIA EMOTION FOR THE PROMOTION OF TOURIST PRODUCT", with the collaboration of the Xunta de Galicia-Axencia de Turismo de Galicia